The Good Thieves by Katherine Rundell 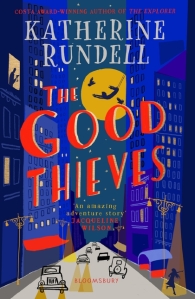 Ever since I read Rooftoppers, I’ve been a huge fan of Katherine Rundell. Her latest book, The Good Thieves, is another triumph. It’s an exciting, tense adventure – a real page-turner of a book.

It’s set in 1920s New York and Katherine has evoked both time and place brilliantly. Some of the city’s most iconic buildings and landmarks are key locations in the story: Carnegie Hall, the Dakota, Grand Central Station and Central Park. There’s even a scene in a shady underground prohibition bar. The beautiful black and white illustrations by Matt Saunders for each chapter heading also really help to capture the era.

Vita Marlowe’s grandfather (Jack) has been swindled out of his family home by Victor Sorrotore, a millionaire con man with mafia connections. The loss of Hudson Castle – the home where Jack was born and then went on to live with his late wife – has been a devastating blow for him. Vita recognises that it was the place where her grandfather “could live alongside all his memories of Grandma Lizzy” and so she resolves to win back the ancestral home.

Vita makes a plan. Hidden in the castle is an extremely valuable emerald necklace that once belonged to Vita’s grandmother. She plans to break into the castle and steal it back. The funds from selling the necklace would mean that her grandfather could afford a lawyer to fight to get his home back.

However, Vita can’t do this alone; there are locks to pick, walls to scale and fierce guard dogs to tame. So she enlists the help of three other children that she meets on the streets of New York: skilled pickpocket and lock-picker Silk, acrobat and trapeze artist Samuel, and animal tamer Arkady.

The heist has begun. And what a ride it is! Imprisonment, dangerous gangs of bootleggers, daring escapes, a moonlit journey and a truly terrifying villain; Sorrotore is ruthless and has no qualms about using his henchmen or his gun against children.

I loved how Vita is an alternative kind of hero. She’s a thinker and a watcher. She notices important things and forms careful, elaborate plans. She also has a disability; Vita had polio when she was five and this damaged her left leg – her left foot curves in on itself and she suffers a lot of pain. While her leg sometimes slows her down, the book very much shows us everything Vita can do. She has a disability but she is not defined by it. She also has an exceptional aim and can throw a stone or a knife with amazing precision, should the need arise. All four of the children have extraordinary talents and make an unbeatable team. I loved the descriptions of them in action: nimble, deft and accomplished.

The book has strong themes of friendship, loyalty and family.

The Good Thieves is a thrilling read. Get swept up in the excitement and join Vita and her friends on the adventure of their lives! Marvel at their their inventiveness and quick thinking and cheer their bravery and determination.

Thank you to Bloomsbury for sending me this book to review and to Toppsta for organising the giveaway.