Monsters in the Mirror by A.J. Hartley 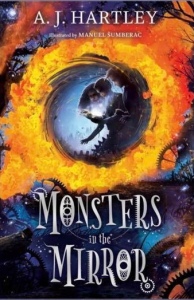 Monsters in the Mirror is the first book in an exciting new MG series. It’s a fantasy adventure packed full of monsters, mystery and magic.

The story is set in America and much of the action takes place in an exclusive high school called Hillside. The main protagonist, Darwen Arkwright, is a new pupil there, having recently moved to live with his aunt in America following his parents’ death. Darwen is not happy at Hillside. His thick Yorkshire accent and the gaps in his knowledge – from complicated algebra to the rules of American football – mark him out as different and make him the butt of people’s jokes. He is soon a target both for the school bullies and the cruel teachers who mock and humiliate him. Thankfully, he makes friends with two other misfits: Rik and Alexandra (Alex).

The school is close to a large shopping mall and it’s here where the story begins. Darwen notices an odd winged creature with freakishly human features. He follows it as it flies above people’s heads, unnoticed by the other shoppers. The shops begin to thin out until Darwen is in a near-empty part of the shopping centre. There’s one ramshackle shop that’s still open: Mr Octavius Peregrine’s Reflectory Emporium. The creature enters through a broken window. Darwen pushes the shop door open and goes inside too.

The shop is full of mirrors of different shapes and sizes. Darwen is alarmed to discover that in one of them he doesn’t see his own reflection but instead sees the same winged creature peeking out at him from beyond the glass. The shopkeeper, Mr Peregrine, is a peculiar and eccentric man. He gives Darwen a mirror to take home.

Darwen hangs the mirror on the inside of his wardrobe door and goes to have his dinner. It’s only later, when he’s getting ready for bed, that he discovers the mirror’s power. The mirror has become a window. When he looks in it, it’s no longer his face staring back at him. Now he sees a moonlit forest.

It turns out that the mirror is a magic portal to another world called Silbrica. Darwen has a very rare skill: he’s a mirroculist which means that after sundown he can see through certain mirrors. He can also pass through them into the world beyond. Silbrica is a world populated by fierce, hellish monsters – the scrobblers and gnashers – and tiny fairy-like creatures called dellfeys. It’s a world in turmoil. Its guardians have lost most of their power while every day, as they build huge machines which scar and destroy the landscape, the monsters are gaining power.

Meanwhile, back at Hillside, there’s been a spate of unexplained thefts, and Rik and Darwen have unearthed a monster skeleton in the school grounds during archaeology club. What does it all mean? Is anything connected? Who will save Silbrica? And what will happen if the monsters find a way out?

A. J. Hartley vividly conjures up this new world with evocative cinematic descriptions, particularly of the landscape. Monsters in the Mirror could easily translate to screen.

The themes of family, friendship, loyalty and bravery are strong throughout the book. There’s also careful and sensitive exploration of grief and jealousy.

There’s lots of great STEM content: the construction of complicated machinery and a powerful handmade trebuchet, and we’re also introduced to the fascinating science of antimatter. Alongside this focus on technology and engineering, there’s recognition too of the less tangible (but definitely not weaker) power of love and hope.

Exciting, tense and terrifying in equal measure, Monsters in the Mirror is a gripping read. The book ends perfectly set up for the sequel which is due to be published late autumn 2019. I can’t wait!

Thank you to uclan publishing for sending me this book to review.