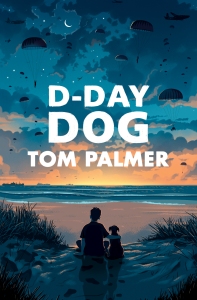 D-Day Dog is the story of war-mad 11-year old Jack. Jack loves playing war games on his PlayStation. He’s fascinated by war and reveres soldiers and war heroes. He’s also extremely proud of his dad, a Reserve soldier. Understandably, he canʼt wait for the school trip to the D-Day landing beaches.

In preparation for the trip, his teacher has asked the class to research someone who’s buried in the Normandy war graves. They will then each place a cross on the grave of their chosen soldier when they visit.

As well as war, Jack has a passion for dogs – his own dog Finn in particular. So when he discovers that dogs, trained to sniff out land mines, were parachuted into France with soldiers as part of the D-Day campaign he’s very interested and he begins his research in earnest; it’s a natural match. Jack is drawn to a photo of a German Shepherd dog, Glen, and his handler Emile Corteil. However, what he discovers about their fate changes his mind about war.

The book sensitively handles the very complex issues surrounding war. Different perspectives are considered and the book offers a very balanced portrayal of war. Jack’s shifting viewpoint is carefully depicted and I found the final scenes in the graveyard to be particularly moving. The scope of the book is broad, covering historic and more recent conflicts, including the war in Syria and the plight of refugees.

Other strong themes in the book are those of friendship and family. I particularly enjoyed watching the friendship develop between Jack and Kasandra. Kasandra is a Syrian refugee in Jack’s class. Their relationship has a tense start but gradually Jack comes to understand the impact of war on civilians. Ultimately, he shows great empathy and kindness towards Kasandra.

D-Day Dog is a very readable story with relatable characters. It’s an engaging, thought provoking book that I highly recommend.

Thank you to Barrington Stoke for sending me this book to review.