The Night’s Realm by Nick Ward 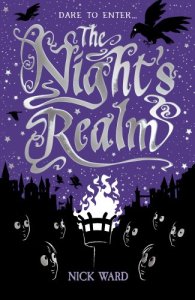 Twelve-year-old Billy has an embarrassing secret. He’s afraid of the dark. However, he needn’t have worried; he’s not alone. It seems hundreds of other children are too. So many, in fact, that their combined fear is enough to sustain and strengthen an evil magician who presides over the Night’s Realm. And it’s here, in this dark shadowy world, where Billy ends up.

The Night’s Realm looks just like his home town except that it’s deserted and in permanent darkness. Plus, a huge fortress now towers ominously over the rest of the town. Billy is drawn towards this fortress and is immediately taken prisoner. His cell inside the tower is identical to his bedroom at home but it’s all just an illusion. Every day Billy and a group of other children are taken to the Bright Room. It’s an amazing place: the children are transported around the world, into space and through time. There’s always a spectacular feast waiting for them when they return. Gradually, however, the children begin to change. Their skin turns grey, their eyes widen and they forget their names, their families and their homes. Except Billy seems to be changing at a slower rate. Even though his skin is greying and his eyes are bigger, he can still remember his name and his home.

This is all the work of the Magician. He is using his magic to homogenise the children and muddle their minds. He wants them unthinking, uncomplaining and compliant. The fortress is full of children like this. They have been dehumanised – given numbers instead of names and all made to dress in the same long habits. These are the night-children. They are controlled by the Magician and do his bidding. Ever hungry for more power, he has the night-children building extra towers in the fortress to house even more fearful children. The Magician’s power is fuelled by their night-time fears. More than this, the creatures that prowl through this world and work for the Magician are actually the stuff of nightmares. Crawlers, snufflers, witches, warlocks and werehounds – whatever torments the children’s dreams – is manifested here in the Night’s Realm. It’s pretty terrifying!

It seems that somehow Billy is able to resist the Magician’s power and so it falls to him to face his fears and rescue the other children from the Magician’s grasp.

The Night’s Realm is a chilling story. The concept – that you could be trapped in a world made from your worst nightmares – is particularly disturbing. There’s plenty of tension and a whole host of entirely unpleasant characters. The illustrations, especially of the Crawlers, are very sinister and add to the unease. Nick’s vivid descriptions bring this midnight world uncomfortably alive. Suspenseful, exciting and gripping – are you brave enough?

Thank you to David Fickling Books for sending me this book to review.