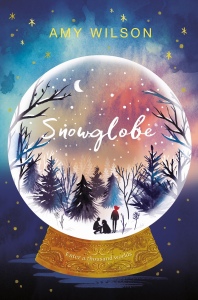 Twelve-year-old Clem is different. She senses it, and the other children at school do too. Her father also knows that his daughter is different, that Clem has inherited some of her mother’s magic. Clem realises she can’t ignore her powers any longer and, when her dad lets her have her mother’s treasured notebook, Clem sets out on a journey of discovery where she’ll learn more about her missing mother and more about herself.

Her mother’s magical childhood home (still inhabited by her older sisters) suddenly appears out of nowhere and is visible only to Clem. This becomes the gateway to Clem’s magical adventure. Inside, room after room is lined with shelves packed full of mysterious swirling snowglobes, fiercely reigned over by her powerful Aunt Ganymede.

I loved the concept of this book: thousands of miniature worlds, each one contained inside a snowglobe. Each is a magical realm: a tiny prison for the person trapped inside. On her first visit to the house, Clem discovers that Dylan – a boy from her class – is imprisoned in a frozen world inside one of the snowglobes. Clem makes it her mission to rescue him and voluntarily enters his snow covered world. We then follow Clem and Dylan as they wrestle with powerful magic, learn more about their own powers and discover how to travel between the globes. It’s a thrilling action-packed adventure. There’s an exciting undercurrent of threat and tension that runs throughout; are the people they meet friend or foe? And worse than that, Clem’s other aunt, Io, the terrifying ruler of these miniature worlds, is never far away. This palpable tension is coupled with dramatic scenes of conflict, all leading to the book’s powerful climax.

Amy Wilson’s language is lyrical and rich. She paints her worlds in vivid detail. And what a breathtaking variety of worlds she has created! I particularly liked the underwater world, and the scenes in the library presided over by a mildly sinister librarian. Her description too of the transition from one globe to another fascinated me and really captured my imagination. The scenes where the children discover more about their own magic are beautiful and moving.

The themes of the book are carefully drawn. Amy explores the power of magic; both as a dark, destructive force and as a power for good – a life force. The themes of familial bonds and friendship are explored in depth. There’s the tricky relationship between Clem and Dylan – her sometimes adversary and sometimes ally. And throughout the book the pull of family is strong. From the heart-wrenching mother/daughter dynamic to the warring sisters pitted against each other, and the anchoring force of a father’s love. All these relationships are complex and nuanced and very believable. They are at the heart of the book.

Snowglobe is a beautifully atmospheric book which had me gripped from the start. It stayed with me long after I’d finished it.