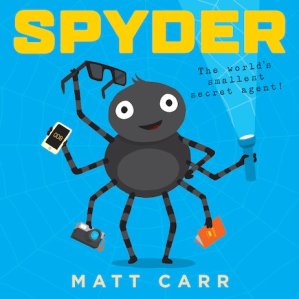 I loved Matt Carr’s début picture book, Superbat, and his second book, Spyder, is also brilliant. I’ll admit that when I saw the cover I presumed that secret agent Spyder was a boy (😳). I was pleasantly surprised to discover that Matt had cast a female spider in this daredevil role. The story follows Spyder on one of her top-secret missions. It’s Tom Webster’s birthday and his cake is under threat. There’s an evil villain on the loose. It’s up to Spyder to stop Bluebottle and save the day (and the cake). The story has it all: peril, daring escapes, special gadgets, disguises and traps.

It’s great fun and very funny. Children will chuckle at the witty puns and wordplay, and those who are familiar with the genre will love all the references to James Bond too: codename 008, Miss Money Spider, and the family’s address of 7 Fleming Road. 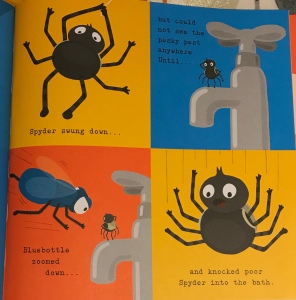 Aside from the humour, the book is also a visual treat. Matt is a graphic designer and this clearly influences his style. Matt’s use of bold primary colours is really striking and eye-catching. I also love how pages are divided with strong lines, giving the book a bit of a comic book feel.

My favourite illustration is right at the back of the book, after the end papers, and I missed it the first time I read the story. It’s hidden away – a bit like those extra scenes you get at the end of a film after the credits have started rolling. I won’t tell you what it is, because that would give the book’s ending away and it’s a great final twist, but it’s well worth looking out for. There are some cool spider-related facts at the back of the book too.

Spyder is another picture book hit for Matt Carr, who’s fast becoming one to watch.

Thanks to Scholastic for sending me this book to review. I reviewed it as part of the Spyder blog tour where I spoke to Matt about the creative process involved in creating his picture books. Click here to get a behind-the-scenes look at some of his early sketches and storyboards for Spyder.