I Swapped my Brother on the Internet by Jo Simmons 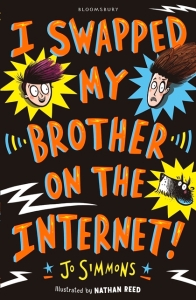 The story begins with a familiar premise: younger brother Jonny is fed up of the relentless mockery and taunting from his older brother, Ted. It’s something anyone with a sibling can relate to. However, Jonny’s solution is a much less familiar one; he decides to swap his brother on the internet. He stumbles across the Sibling Swap website and eagerly completes the online application form. After only a moment’s hesitation, he submits the form and sits back to await Ted’s replacement.

What follows is a series of new brothers, none of whom fully meet Jonny’s expectations and each needs returning. Having omitted to tick the boxes marked ‘human’ and ‘living’ on the application form, the first three replacement brothers range from a merboy, and a boy who thinks he’s a meerkat, to the ghost of Henry VIII! Jonny has fun with all three but it’s probematic having a brother whose legs turn into a giant fish tail when wet, or a brother who doesn’t speak and likes to eat daddy-long-legs. As for Henry VIII, his booming laugh and boorish behaviour cause far too much mayhem. The human replacement brothers aren’t much better either. There’s über competitive Alfie who likes to bet about everything, and will stop at nothing to win. His angelic ‘butter-wouldn’t-melt’ expression lets him trick unsuspecting adults and provides a handy smokescreen for all the mischief he gets up to. Pete is seemingly Xbox obsessed and does little else but play on it, hogging the controller. The final replacement brother is J2, a duplicate of Jonny.

Gradually Jonny begins to miss Ted and he starts to reminisce about him and the things they did together. The story is definitely a case of be careful what you wish for. Jonny realises that Ted wasn’t so bad after all and that he’d actually rather like his own brother back. However, getting Ted back proves much harder than getting rid of him in the first place.

The book is easy to read, fast-paced and action-packed. Children will love the slapstick humour, the comical illustrations and all the silly scrapes that Jonny and his assorted brothers get into. There’s an exciting element of mystery and suspense to the story too; we are given tantalising clues which start us guessing as to who’s behind the Sibling Swap website. As a side note, I want to say how much I enjoyed the chapter titles; Jo Simmons uses clever puns and references to books and films (The Past Participating, An Inspector Calls, The Phantom Menace…) and these added an extra level of humour to the book. The publishers have included a nice touch at the end of the book too: there’s an actual website www.siblingswap.com where you can download activities and games linked to the book. There are no opportunities to swap an unwanted brother or sister though!

Thank you to Bloomsbury for sending me this book to review. I reviewed this book as part of the I Swapped my Brother on the Internet blog tour.