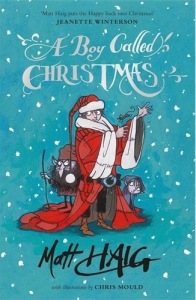 This is a hugely enjoyable book. It is the story of how an eleven year-old boy called Nikolas grows up to become Father Christmas. I loved how, one by one, the origins of the different traditions associated with Father Christmas are explained – his distinctive laugh, the characteristic red outfit and hat, his beard, the toy-making elves, the wooden sleigh and flying reindeer, and stockings full of presents. All of these elements are imaginatively and cleverly woven into the plot.

The story is set in Finland and the Far North. This is where Elfhelm, the elf village, is reputed to be. In the early chapters of the book, Nikolas’s impoverished father leaves on a three-month mission to the Far North. He, and the band of men he travels with, are hoping to find proof of the existence of elves for which there is the promise of a significant financial reward from the king.

Nikolas’s mother is dead and so his evil Aunt Carlotta arrives to look after him. When he can take her cruelty no longer, Nikolas decides to head north in a bid to find his father. And so his great adventure begins.

He finds Elfhelm but it is no longer home to happy and joyful elves. Joy and goodwill have been actively discouraged by the recently elected leader of the Elf Council, Father Vodol. He regards goodwill as another name for weakness. He knows that goodwill comes from happiness and so he has been doing everything in his power to make the elves miserable. He has reduced wages, banned dancing and spinning tops, and introduced a hierarchy of elves which has led to segregation. With parallels to contemporary world politics, Father Vodol has risen to power on a tide of fear. He has used his newspaper, The Daily Snow, to propagate a fear of outsiders, particularly humans.

Luckily, not all goodwill has been stamped out. When he arrives in Elfhelm, weak and exhausted, Nikolas is rescued by Father Topo and his granddaughter, Little Noosh. They stand by him against the prejudices and distrust of the other elves. Gradually things begin to change in Elfhelm as Nikolas proves that not all humans are bad and in so doing earns the respect and trust of the elves. Happiness, goodwill and spickle dancing are restored.

There is so much joy in this book. It’s funny and I laughed out loud a lot. It’s magical: I loved the secret elf world, the flying reindeer, and the sense of folklore and fairy tale. And then there’s the feel-good glow it gives you as kindness triumphs over bitterness and fear, and good defeats evil. A fabulous read at any time of the year but perfect in the run up to Christmas.