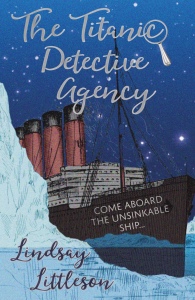 In The Titanic Detective Agency Lindsay Littleson has taken one of the most widely known historical disaster stories and told it from the perspective of two young passengers. Twelve-year-old Bertha Watt, travelling in second class, has ambitions to become a polar explorer or an aviator. She’s a young girl on the brink of her teenage years and she’s starting to question and rebel against society’s restrictive conventions. She has left her home in Aberdeen and is travelling with her mother to begin a new life in America. Bertha’s father is already living and working in Oregon. Swedish teen Johan is also travelling to join his father in America. He has a third class ticket. Most of the book is told from Bertha’s perspective and is interspersed with some chapters from Johan’s point of view.

On board, Bertha makes friends with eight-year-old Madge Collyer. While feeling at a loose end, they set up the Collyer-Watt Detective Agency together. They set about solving two cases. The first concerns the mysterious and suspicious Mr Hoffman, father of two apparently motherless young children. Bertha and Madge suspect that all may not be as it seems. After a chance encounter with Johan where he shows Bertha a letter and a map that have come into his possession, the second case is a search for treasure hidden on board.

The activities of the Collyer-Watt Detective Agency are set against a backdrop of life on the Titanic. I really enjoyed the depiction of life on board. There are excellent descriptions of the daily routines, the pastimes, and the ship’s decor. You really get a sense of what it was like.

I was also impressed by Lindsay Littleson’s ability to create tension and excitement despite the story of the Titanic being so well known. There’s a building sense of foreboding: uneasiness, premonitions and nightmares. Once the ship starts sinking, the book vividly brings to life the horror of that night: the terrifying grating sound as the iceberg rips the ship open; the icy sea water gushing in and swirling ankle- then waist-high; and the haunting image of frozen bodies floating in the sea in their life jackets.

The book also effectively highlights the disgraceful way in which third class passengers were treated differently – the suggestion that somehow their lives were worth less because they’d paid less for their tickets. We witness the selfishness of first and second class passengers in half-full lifeboats and their failure too to turn back for those in the water. The devastating loss of life really hits home too. The scenes of the men left on board, fully aware of their fate, were especially sobering.

The Titanic Detective Agency is a really great piece of historical fiction. I loved the interweaving of fact and fiction. Bertha, Madge, Johan and some of the other characters in the book were actual passengers on the Titanic. At the end of the book there are photographs and small biographies of some of the passengers, letting you know more about the lives of those that survived.

I also really loved Bertha’s realisation that she had completely underestimated her mother’s bravery and strength. The scene where Bertha recognises that bravery isn’t necessarily about daring deeds and intrepid adventures but that it can be something quite understated is really powerful and very moving.

Thank you to Cranachan Publishing for sending me an electronic copy of this book to review.