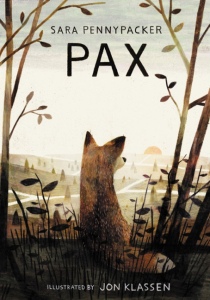 Pax is incredible. It’s one of the best books I’ve read in a long time. I had been wanting to read it for ages but knew it would break my heart and so I held back. It tells the story of Peter, a 12-year-old boy, and his friendship with Pax, the orphaned fox he took in from when he was a two-week-old pup. The book is narrated from the perspectives of Peter and Pax in alternating chapters. I really liked this approach to the narrative. I particularly enjoyed reading the chapters told from the point of view of the fox. Pax’s descriptions involve all the senses, rather than just relying on sight, and this brings his world vividly to life.

The sharp odours of pine – wood, bark, cones, and needles – slivered through the air like blades, but beneath that, the fox recognised softer clover and wild garlic and ferns, and also a hundred things he had never encountered before but that smelled green and urgent. (Pages 1-2.) 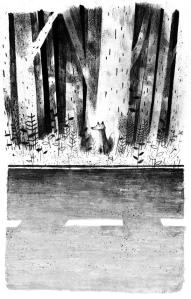 At the start of the story, Peter is forced to abandon Pax by the roadside. War is coming and Peter is moving to his grandfather’s house. Peter’s father is adamant that they cannot keep the fox. It’s a decision that Peter immediately regrets and he spends the rest of the book journeying across country to return to his fox. The bond of friendship between Peter and Pax is strong, and their story of separation and reunion is incredibly moving. It’s a very real and nuanced relationship.

Part way into his journey, Peter breaks a bone in his foot. He is taken in by Vola, a woman who has deliberately cut herself off from society and lives in the middle of nowhere. I loved how the relationship between Peter and Vola developed from prickly suspicion to one of trust and respect. Vola is wrestling with demons from her time at war. Peter draws her out of herself and helps her to reconnect with society. Vola nurses Peter and helps him re-gain his mobility and physical strength. She provides the succour that Peter has been missing since the death of his mother. This mutual re-habilitation is the basis of another beautifully crafted relationship in the book.

Another important element of the book is the difficult and fiery relationship between Peter and his father. Peter is haunted by the adage “the apple doesn’t fall far from the tree”; his father is a violent, aggressive man and Peter fears that he will turn out the same.

Something else that I really like about Pax is that it doesn’t shy away from difficult subjects. War is encroaching and we witness first-hand its devastating effects on the natural world. The tangled wires and “dark electric scent” of the land mines that scar and destroy the hillsides are in stark contrast with the lives we see lived in harmony with the land (Pax and the other foxes, and Vola). Vola’s painful reflections about the man she killed in war are poignant and powerful too:

Set alongside the destructive power of war is the restorative power of a life lived in harmony with nature. We watch Pax learn to live again as a wild animal, and we see Vola peacefully living at one with the natural world, enjoying its produce and carving wood by hand.

The book is illustrated by Jon Klassen and his stunning cover art was what originally drew me in. His beautifully atmospheric black and white line drawings illustrate key moments in the story too.

Pax is original and moving. It deals with everything that’s important in life: friendship, family, love. I wholeheartedly recommend it.