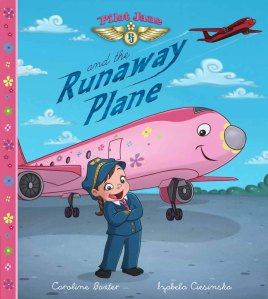 Pilot Jane and her aeroplane Rose are an airborne dream team. They have won awards for speed and have a reputation for always getting their passengers safely to their destination, whatever the weather. They are so highly regarded that they are chartered to transport the Queen of England to a party. However, disaster strikes when Rose contracts plane flu. Engine failure means that she is unable to fly.

Mighty Mitch, a replacement jet, is brought in. He’s the biggest plane Jane has ever seen. Unfortunately, he has some outdated ideas about female pilots. He assumes Jane will either be slow or a scaredy-cat. He decides to show her that he’s the one in control and so, not long after take off, he begins to show off – looping and swooping through the air. Proud and conceited, Mitch thinks he’s better than Jane and that she will be no match for him. However, he’s chosen the wrong girl to pick a fight with!

The book conveys a positive message about female strength. Jane is confident and capable. She can stand her ground, is cool in a crisis and knows how to lead. Yet this female empowerment is not at the expense of female/male relations. The final message of the book is one of collaboration: girl and boy power.

I liked how the reader gets taken around the world with the story, seeing some of its most famous landmarks in cities across the globe. The book is written in rhyme and this adds to its read-aloud appeal. The cheerful illustrations are very attractive and will definitely captivate a young audience – they certainly caught the eye of my 15-month-old who, although too young for the story, did keep returning to the book to pore over the pictures! There is also a lovely gentle humour running throughout the book. I particularly liked the handbag-dwelling Corgi and the terrified look on its face during the flight.

I have just one little niggle: I would have preferred for the plane not to be pink and covered in flowers. I think this somewhat detracts from the book’s message and reinforces the gender stereotypes it is trying to challenge.

Thanks to Big Sunshine Books for sending me this book to review. I reviewed this book as part of the Pilot Jane blog tour.