The Storm Whale by Benji Davies 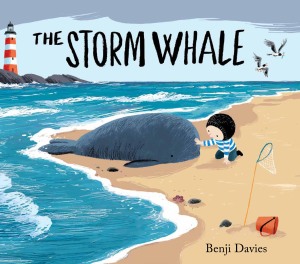 Published by Simon and Schuster, 2013.

Benji Davies is an award-winning children’s author and illustrator. The Storm Whale was his début picture book. It is beautiful.

It tells of a young boy, Noi, and his father who live with their six cats by the sea. Noi’s father is a fisherman and he spends long days at sea. Noi is alone a lot of the time and he is lonely. 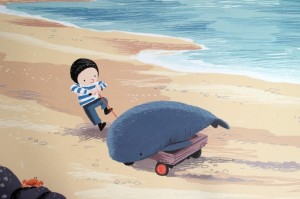 One night there is a great storm. The following morning, Noi heads to the beach to see what has been left behind. He is surprised to find a beached baby whale. He knows that whales shouldn’t be out of the water so he drags him home on his cart and puts him in the bath. Noi sits beside the whale all day and keeps him company. He plays him sea music to help him feel at home and talks to him about his life on the island.

When Noi’s father discovers there is a whale in the bath, there can only be one possible conclusion. Noi’s dad explains that the whale belongs in the sea. So, with his father’s support, Noi says a difficult goodbye to his whale friend.

This is a wonderful story of friendship and kindness. I also love the exploration of the relationship between Noi and his father; Noi’s father comes to realise that he has been neglecting his son. After they have returned the storm whale to the ocean, Noi and his father begin to spend much more time together.

The illustrations are wonderful. Benji Davies has created a remote, windswept setting for the story and the isolation of this tiny fishing community mirrors Noi’s own feelings of  loneliness. The sea is at times threatening, at times peaceful and idyllic. The depiction of the stormy sea is incredibly atmospheric: dark clouds roll in, the ocean is grey and menacing, and you can almost feel the driving rain as it falls diagonally across the scene. Noi and his father come alive on the page; a bowed head, the gentle touch of a hand, a backwards glance – all convey so much emotion.

Benji Davies has since written and illustrated the sequel, The Storm Whale in Winter, which I can’t wait to read.

We borrowed this book from Solihull Libraries.