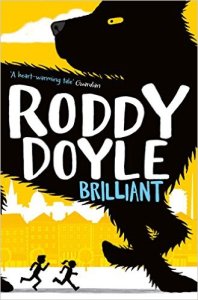 An adventure story set in Dublin, mainly over the course of one night, Brilliant follows brother and sister, Rayzer and Gloria, as they battle against the Black Dog of Depression – not a metaphor but a physical embodiment of the mental illness that is plaguing many of the city’s inhabitants. For them, it is their Uncle Ben who has been affected and whom they want to save. So one night, unbeknownst to their parents, they set out in search of the Black Dog who is responsible for all the misery and for stealing Dublin’s funny bone.

Along the way, they are joined by other Dublin children who each have a family member similarly troubled by the Black Dog.  The children follow the Dog across the city, at times chasing him, at other times being pursued themselves. Together they discover the power of the word brilliant.

The story is a little slow to get started with a fairly long time spent setting the scene (four chapters) and, once we get to the chase, it seems a little drawn out and repetitive. The subject matter is serious and quite dark and may not appeal to some readers. However, there is a host of likeable characters including: the main protagonists, Ernie the vampire, a flock of sarcastic seagulls and a singing meerkat. The dialogue is realistic and witty – I often found myself laughing out loud – and the message of the book is positive. The children make attractive heroes; they are resourceful and brave, driven by a selfless desire to make things better for others.